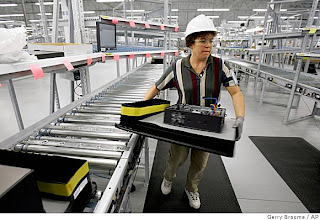 Bad news for the computer industry has just recently been released. Thanks to weak demand for consumer PCs, growth for worldwide PC shipments showed a 1.1% decline from the first quarter of 2010 according to a Gartner’s PC Quarterly Statistics Worldwide by Region program. Weak demand for consumer PCs was the primary inhibitor. However, despite the weakening of sales around the globe, the Asia Pacific region showed encouraging growth as PC shipments surpassed 28.2 million in the first quarter of 2011. This is interesting due to the fact that, statistically speaking, sales of consumer PCs usually do not show this much popularity or growth in the beginning of the year. The first quarter of most years is stereotypically slow for PC sales. Gartner also noted, however, that these shipment results indicate potential sluggishness and not a typical seasonal slowdown. Gartner pointed out that these figures are well below earlier predictions for a 3% growth in the first quarter of 2011. In response to different markets in Asia, Gartner said that consumer PC sales were also slow both in China and also in Taiwan and that they failed to attract customers during the celebration of Chinese New Year. Consumers in India were occupied by the Cricket World Cup and preferred to upgrade their personal PCs or buy a new TV rather than home electronics. In addition to that, PC shipments in Japan hit a decline of 13.1% in 2011’s first quarter. According to Principle Analyst for Gartner Mikako Kitagawa, “Weak demand for consumer PCs was the biggest inhibitor of growth. Low prices for consumer PCs, which had long stimulated growth, no longer attracted buyers. Instead, consumers turned their attention to media tablets and other consumer electronics. With the launch of the iPad 2 in February, more consumers either switched to buying an alternative device, or simply held back from buying PCs. We’re investigating whether this trend is likely to have a long-term effect on the PC market.” Computer company HP accounted for 17.6% of worldwide PC shipments in the first quarter of 2011. HP also maintained the number one spot. Acer saw declining shipments of 12.2% and Dell reported a shipment decline year-over-year for the first time in six quarters. Lenovo continued to price products competitively in the consumer market as well as the professional market and enjoyed the strongest growth among the top vendors as a result. Source: PCWorld – Worldwide PC Shipments Slip in 2011