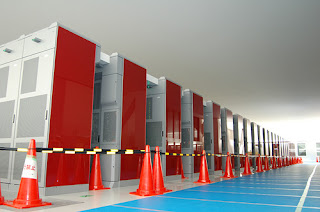 There is a recently released list of the Top 500 most powerful computers in the world, and once again Japan’s K Computer takes the number one spot with an increase from 8.162 petaflops to 10.51 petaflops per second. This balances out to 10.51 quadrillion floating-point operations per second. The letter “K” is short for the Japanese word “kei”, which symbolizes 10 quadrillion. Coincidence? I think not.

On the Top 500 list from June, the K Computer took the number one spot out of the hands of China’s Tianhe-1A system. The Tianhe-1A remains in the number two spot at the moment at 2.57 petaflops. Following in the number three spot is the Oak Ridge National Lab’s Jaguar supercomputer. After that, the rest of the list looks pretty much the same as the last, with many companies holding the same spots as they previously did. According to TOP500 editor Erich Strohmaier, “This is the first time since we began publishing the list back in 1993 that the top 10 systems showed no turnover.”

The K Computer, which is installed at the RIKEN Advanced Institute for Computational Science (AICS) in Kobe, Japan in partnership with Fujitsu, uses 705,024 SPARC64 processing cores. If you want to know just how many that is, it is more than the rest of the top five on the list combined. In addition to that, the K Computer uses 12.66 megawatts of power, four times more than its nearest competitor. This is also more than the 9.89 megawatts of power the computer recorded in June. However, despite these high numbers, the K Computer is still one of the most efficient supercomputers on the list, delivering 830 Mflops per watt.

The K Computer was installed in 672 racks back in June. An expansion of 800 cabinets allowed the 10 petaflop achievement to be accomplished. Just a week ago, Fujitsu announced the expansion possibilities of the K Computer as it could possibly grow to a theoretical 23 petaflops.

Aside from the rankings remaining unchanged, other characteristics evolved with the November 2011 list. The entry point for being on the Top 500 list is now at 50.9 teraflops with the combined performance across all 500 supercomputers being 74.2 petaflops, an increase from the 58.7 petaflops recorded in June. Gigabit Ethernet is still the most popular internal system interconnect, being used in 223 systems. However, InfinfBand use increased to 213 systems.

Average power consumption continued to rise with 29 systems on the list confirmed at using more than one megawatt of power. The most energy efficient supercomputers are BlueGene/Q with 2,029 Mflops per watt. IBM just filed a patent for a massive supercomputer that could potentially reach 107 petaflops. In total all of the systems that reported in on power consumption combined for more than 159 megawatts.

Find out what is going on in the Tech Army World.

What are the Top 10 Money Making Missions?

What other companies have joined and what do they do?

How do I join the
Tech Army Organization ?