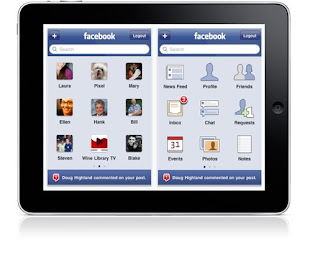 Facebook is planning on releasing an app for the iPad in the next couple of weeks that is said to feature a “slick design” as well as new Facebook Chat and Groups functionality. In addition to that, the app is also said to feature an “amazing” photo and video experience.

This news comes right after another report that Facebook was preparing an HTML 5 web app for iOS devices. In addition to that, Facebook is supposedly working on a new website optimized for the iPad. However, Facebook’s refreshed site is only meant to be a “supplement” to the iOS apps from Facebook, not a replacement.

With the high popularity of the iPhone’s Facebook app, it is surprising that Facebook hasn’t created one for the iPad. To make up for the lack of an app, iPad users have been forced to turn to third party apps like Friendly, MyPad and Facely HD or just go with Facebook’s actual website.

However, that could all change if the latest round of rumors turns out to be true. It has been said that the proposed iPad app has been in development for over a year. It has been said that CEO of Facebook Mark Zuckerberg is heavily involved in the design of the app as well as its features. Photos and videos will be displayed full size at full resolution and the app is also expected to be free, just like all of Facebook’s mobile apps.

Put your eye on the problem with Camera Security Now, installing security cameras since 1999. We install in the US and we can help you do it yourself.